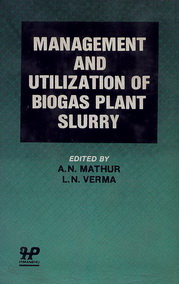 It is estimated that about 1 million biogas plants are function in our country and by 200 A.D. this number will touch to 1.2 million. Biogas plants not only produce biogas for domestic, agricultural and industrial purposes, but they also discharge a considerbale amount of digessted liquid slurry, which has many nutrients useful in agriculture, sericulture, forage culture and animal husbandry. Profitable handling and utilization of biogas plant slurry is, therefore, a very important aspect attached to biogas technology. Since the wet slurry contains about 90 percent water, its management becomes a difficult job. In order to meet the dearth of published literature on the idea of manahemnt of biogas slurry, this book has been prepared by synthesing the contributions of experts made to a national workshop held at Udaipur in 1987. This book will? be of considerable help to the farmer, agricultural Scientists, agricultural engineers, administrators and planners of our country and abroad who are engaged in integrated rural development.

A.N. Mathur, M.E. (b.1945) joined the Department of Mechanical Engineering College of Technology and Agricultural Engineering., Rajasthan Agricultural University in 1967 as Lecturer and now working as Professor and Principal Scientific Officer, Regional Centre of Energy, Rajasthan Agricultural University, Bikaner, Udaipur Campus. Professor Mathur has a brilliant avademic career. He obtained his B.E. from Jodhpur University, Jodhpur in 1973 with distinctions. He has been actively engaged in teaching and research. He is one of the pioneers in the field of Renewable Energy in India. He has attended a number of National and International Conferences, Seminars and Workshops including The World Energy Conference held in 1985 at Delhi, 8th Miami Conference in USA, and FAO/UNDO Training on Biogas in China. He has to his credit a number of Scientific and teachinal papers contributed to national and international learned periodicals besides editing "Bio Energy for Arid & Semi Arid Regions." L.N. Verma, M.Com. M.Lib. Sc. (b.1939) joined the staff of the Sukhadia University Library Systems in 1986 as Assistant Librarian. He has received his M.Lib. Sc. degree from the Rajasthan University, Jaipur with first rank and gold medal. He has a long experience of Managing independently mibraries of the university library systems. He also has long experience of teaching library science student of various levels in the Department of Library Science. He has completed his Ph.D. work and contributed many articles to the library science journals. Currently he holds the charge of the post of the Head the Department of Library Science, Sukhadia University, Udaipur.

Be the first to review “Management & Utilization Of Biogas Plant Slurry.” Cancel reply 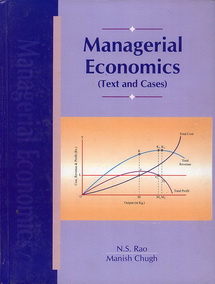 Managerial Economics (Text And Cases) ₹895.00
We use cookies to ensure that we give you the best experience on our website. If you continue to use this site we will assume that you are happy with it.
Accept