Agriculture as a visible aspect of landscape on earth'ssurface has been variable with people, space time and as such form an integralpart of geography. Not only the structural and spatial character ofagriculture, but even its taxonomic aspect has attracted geographers who, likeany other specialist have attempted to study and analyses related variedaspects of agriculture at global to regional and even micro and microscopic(local) levels, based on scientific and suitable quantitative methods andtechniques. The concept of agricultural typology is a systematic or taxonomiccharacter and represents the sum of total of the mutual relation of social,operational, productional and structural attributes in which an agriculturallandscape develops, It helps to explain why a particular type emerges in aparticular area and at? a particular moment of time. The agriculturaltypological investigation is thus a scientific, precise and comparable analysisbased on selected 24 to 27 variables, covering the entire taxonomix gamut ofcomplex agricultural features of the Tribal Region of the Southern Rajasthan.The application of the approved IGU methods and techniques for agriculturaltypological types and regions in the Tribal Region of Southern Rajasthan hasreflected the insufficiency of the methodology at this microscopic level. Theresult of the investigation are far from the existing reality of theagricultural? scene in the area andtherefore, an attempt has been made towards modification in the class valuesand sub-categorization after the third order agricultural types. Additionally,the investigation uses the agricultural development planning in the tribalRegion of Southern Rajasthan.

The author of this book Dr. L.C. Khatri (b.1-2-1955) took his post-graduate and Ph.D. degree in Geography from Sukhadia University, Udaipur, in 1977 and 1988 respectively. He has taught post-graduate and under-graduate classes for over one decade in various Government colleges of Rajasthan, at present he has been working as a lecture in post-graduate geography department, Government Meera Girl's College, udaipur. He has also published about half a dozen scientific research paper in National, International journals and edited books. His area of specialization include Agricultural geography, Waterlands studies and Aerial photo-interpretation. Dr. Khatri has been associated and life member of National Geographical Association of India (NAGI), New Delhi and Rajasthan Geographical Association, Bhilwara, Rajasthan.

Be the first to review “Agricultural Typology” Cancel reply 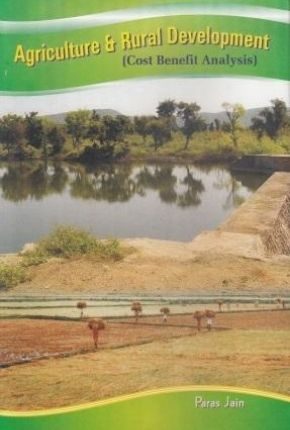 Agriculture & Rural Development (Cost Benefit Analysis) ₹450.00
We use cookies to ensure that we give you the best experience on our website. If you continue to use this site we will assume that you are happy with it.
Accept